It’s All In The Mix

It’s All In The Mix

There’s just something about a mixtape! I love getting them and I love making them.  I love setting a mood with music and then expressing that mood in the cover design.

It reminds me of this quote:

“The making of a great compilation tape like Breaking Up Is Hard to Do, it takes ages longer than it might seem.  You gotta kick it off with a killer, to grab attention, then you gotta take it up a notch.  But you don’t want to blow your wad, so then you cool it off a notch.  There are a lot of rules.” – High Fidelity  [watch the scene]

I was recently going through my husband’s center console and I found this collection of mixes I’ve made for him over the years. The thing is, I still love all the music and design of each and every one of them! 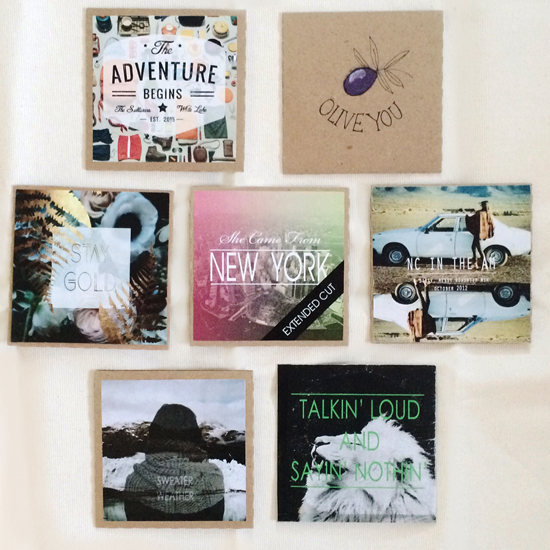 They are top to bottom, left to right:

THE ADVENTURE BEGINS:  a mix I made just last month for our first camping trip together.  It features songs that evoke the great outdoors, including campfires and mosquitos.  I’m especially proud of the first song which is taken from this children’s video and is super catchy.  [Watch the video: Camping Out by Stella and Sam]

OLIVE YOU:  a very lovey mix and therefore very private. ;)  However, it is notable because it’s the only cover design I painted by hand.  Also, it’s a pun because we both love puns

STAY GOLD: this was for a mixtape party which we hosted for friends.  You can listen to it here as well as see a little of the evolution of the cover design.

SHE CAME FROM NEW YORK: a mix for friends in New York.  Sadly everyone there is so advanced that they couldn’t play my outdated media on their mp3 and i-whatevers! :)  So I made an extended version with songs which didn’t necessarily fit the theme (I think one song was about San Francisco, for heaven’s sake) but songs I liked, and I gave it to my honey.

NC in the AM: a dirty, messy road trip mix for a very long drive from New England to North Carolina.  Incidentally, it was on that trip that hubby and I started dating.

SWEATER WEATHER: I love fall-feeling mixes the best because the songs are warm and comforting, like that gorgeous scarf on the cover.  I don’t have this fall mix online anywhere, but you can listen to this one instead: An Old Friend Returns to Tell a Tale

TALKIN’ LOUD and SAYIN’ NOTHIN’: This was a mix for a mixtape party as well.  Everyone made a mix and picked them randomly out of a bag.  The guy who got mine was visibly disappointed but I still maintain that it’s good!  It’s full of old soul and a few modern songs too.  The title was taken from this song by James Brown.

Sadly, it seems that mix-CDs may be going the way of the mix-tape and an online playlist just doesn’t  have the same feel.  Even so, I think I’ll be making mixes for a long, long time to come!