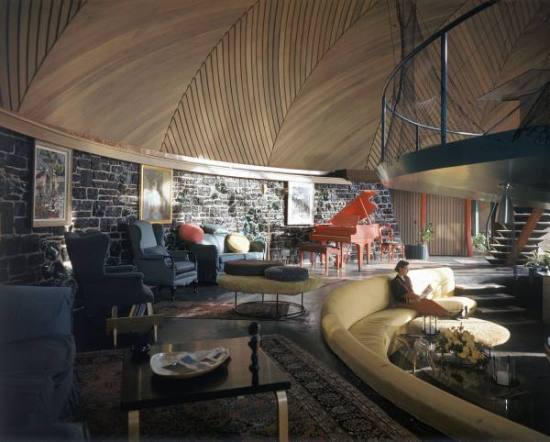 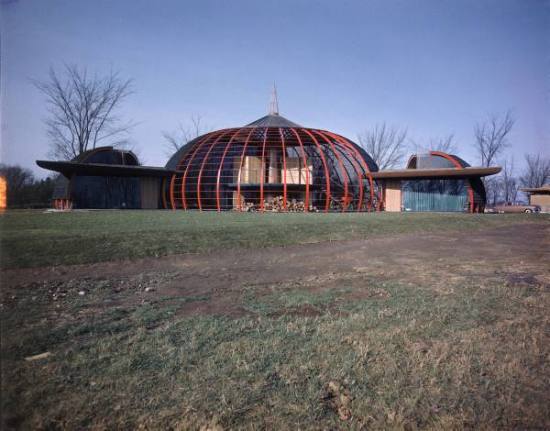 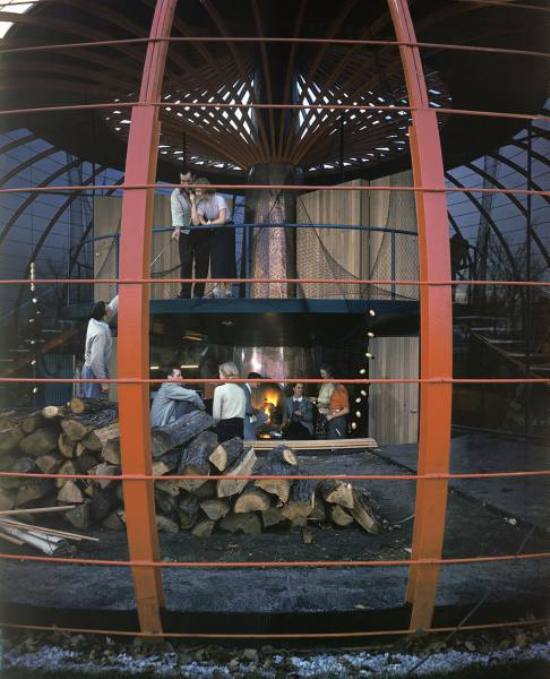 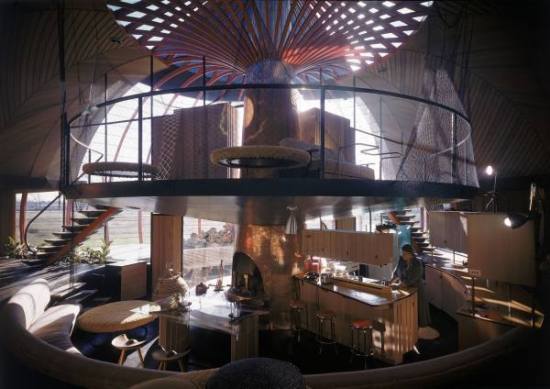 Architect Bruce Goff, one of the few U.S. architects whom Frank Lloyd Wright considers creative, scorns houses that are “boxes with little holes.” But he likes circles, believing that a circle is “an informal, gathering-around, friendly form.” Working on this theory, he designed a house for the Albert Fords of Aurora, lll. which makes most modern houses look quaint.

The house consists of a huge, domed center circle, 166 feet around. and two semicircular bedroom wings, all shaped by steel arches made of standard Quonset ribs. At the base of the center sphere, which is built on three levels, is a curved cannel coal wall, treated against smudging and weathering. For sparkle, this wall is studded with ordinary playing marbles and with numerous 100-pound clusters of bright glass cullets, a hardened waste product periodically cleaned from glass furnaces.

Navy surplus rope covers the horizontal ceilings. Cypress siding, laid in a herringbone pattern, lines part of the domes and walls. There are no windows, so ventilation is provided by hinged louvres and ceiling vents. Chief hazards of the main living space are the glass walls, which carry out Goff’s theory of “space moving inside and out.” To keep guests from trying to follow suit Mrs. Ford is growing succulent plants in ditches outside the glass walls.
The house, which cost $64,000, delights its owners. Mr. Ford, who is a gas-company executive, likes the doorless carport (“No trouble now to put the car away”); Mrs. Ruth Van Sickle Ford, who is the director of the Chicago Academy of Fine Arts, is pleased to have a balcony studio where she can paint, a gallery where she can hang pictures and plenty of room where she can entertain-all in a house that requires little care. Friends and curious passers-by are often less delighted. While building was in progress so many people came to gape at what they variously called the “big apple,” “birdcage,” “dome” or “hangar” that the Fords posted a sign reading, “We don’t like your house either.”

There are more photos here.  And this account of a young boy who lived there from age 6 to 13 is fascinating, with additional photos.